The 90s were a decade that saw a lot of new inventions – DVDs, Pokemon, Photoshop and of course, the internet – but few inspired as much ire as the Metrosexual.

Coined by journalist Mark Simpson in 1994, the term described a vacuous, urban-dwelling man who invests significant amounts of time and money on his appearance, or as one magazine editor put it: “men who moisturise and read a lot of magazines”. So-called Metrosexuals were ridiculed, lambasted as narcissistic and unmasculine. What sort of guy cares about moisturiser, anyway?

Twenty years later, questions about how much men should care about their appearance continue to be mired by traditional notions of masculinity. But with a new generation of consumers, attitudes are starting to change.

Skincare is a good example of this: once a ritual beginning and ending with a dab of Old Spice, now men are becoming receptive to more sophisticated products and ingredients. Last year, a Mintel study revealed that nearly two thirds of men in the US use facial skincare, which might explain why male personal care is on track to be a $166 billion industry by 2022.

Younger consumers are leading the shift in attitudes towards men’s skincare. Looking at the global audience for this – men who’ve purchased grooming products, as well as those with an active interest in the topic – 62% are aged 16-34, according to data from GlobalWebIndex. 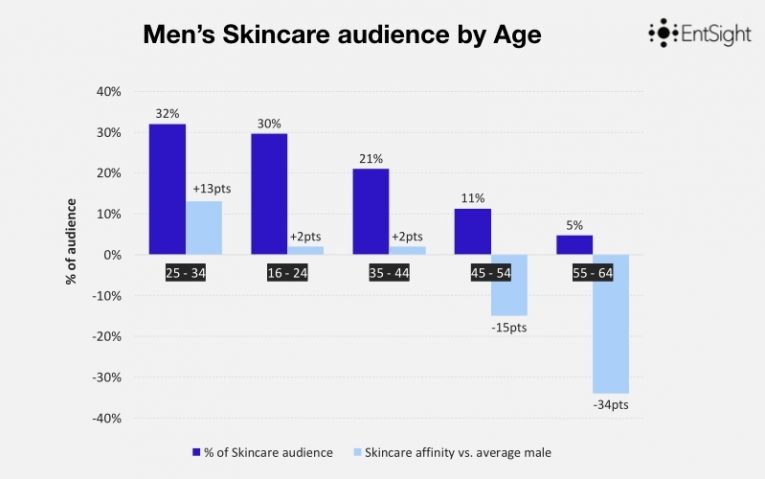 By contrast, few older men engaged with skincare. 55-64 year olds made up just 5% of the audience and were 34 percentage points less likely to be interested in skincare than the average male consumer globally, suggesting that ‘macho’ ideals do persist among the older generation. Research backs this up: a 2016 study identified that in the US, older men stick to a 1950s/60s blueprint of masculinity, avoiding actions and behaviour that might be construed as feminine – something skincare has typically been perceived to be.

Broader lifestyle trends may also be influencing young men’s take-up of skincare, particularly growing interest in health and wellness. This trend is much more impactful among males than the equivalent female audience, suggesting that these men could be purchasing skincare products as an extension of their regular health practices. For example, 80% of men with affinity for skincare exercise regularly, and are 21 percentage points more likely to do this than the average man globally; by comparison, only 59% of women do this, at just a fraction (five percentage points) above the average female consumer.

Similar over-indexes occur for interest in health food & drink and purchases of organic products. With this in mind, beauty brands targeting men would be wise to adapt their messaging to communicate how skincare is a natural step on from their gym routine.

Splashing the Cash (or not)

Are men prepared to invest in expensive skincare? The jury’s still out. There’s certainly evidence that these consumers do opt for premium products over cheaper alternatives: 62% of the men’s skincare audience reported a willingness to spend more on these, and just 9% were economical when making purchases. Behaviourally, the audience is an aspirational one, seeking to gain the respect of peers and earn status via their work, all things that usually point to greater engagement with premium brands. 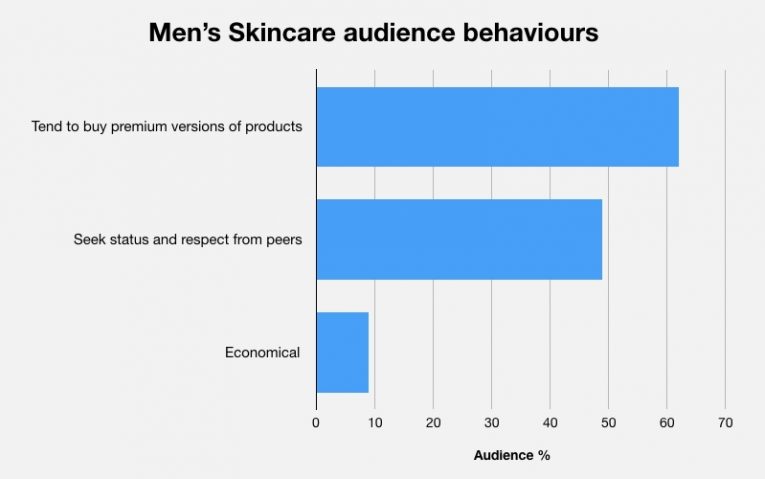 However, this all seems lost in translation when it comes to their skincare purchase habits, as low-cost brands beat premium ones hands down. More than a third of the audience, for example, purchased a Nivea product during the previous month, most of which retail at less than £5. This was followed by L’Oréal (28%) at a slightly higher price point and acne specialists Clean & Clear (17%).

In contrast, Shiseido – the top premium brand, whose products can cost anywhere from £20 to £90 – was purchased by 10% of the audience, illustrating that prestige skincare brands need to do more to prove their value to male consumers.

Wrinkles are frequently identified as women’s biggest skincare concern. Indeed, the proportion of younger women using anti-ageing skincare has shot up among the under 35s, with nearly a third regularly applying this, according to a study by US retailer Dermstore. Yet the picture is quite different among men of a similar age demographic. 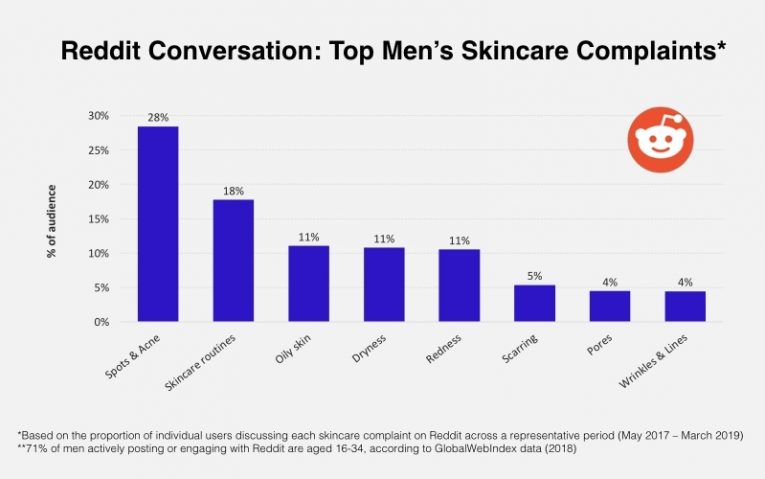 EntSight examined a sample of online skincare conversation appearing on Reddit communities such as r/SkincareAddiction, and discovered that breakouts and acne cause most anxiety among men posting. Just over a quarter of the Reddit men’s skincare audience sought advice for this issue or offered their own tips, with many other concerns – including oiliness (11% of the audience) and scarring (5%) – related to this central complaint. Only 4% discussed ageing.

This is partly down to differences between men and women’s skin. Men have oilier skin, thanks to the production of androgens after puberty, hormones that make them more likely to suffer from severe acne. So, acne is often a bigger concern in the short term.

However, a broader issue affecting men is the lack of guidance around formulating a skincare routine. On Reddit, nearly a fifth of consumers we examined discussed this, looking for recommendations on the products to use during the morning and at night, and how to adapt this seasonally. More advanced skincare enthusiasts, meanwhile, invited other knowledgeable users to critique and optimise their routines.

Skincare routines are a key area of opportunity for brands, most of whom have left media and online communities to provide consumers with direction. Even so, one of the top results on Google for ‘men’s skincare routine’ is a piece in Elle – a women’s magazine – illustrating just how dire the information gap is. Producing content on how best to use specific products and ingredients, and updating websites to match the breadth of information provided on female-focused product pages are good first steps towards rectifying this.

Now that men are getting to grips with skincare, what became of the original Metrosexual? According to psychologist Tyger Latham, writing in Psychology Today, many of the behaviours associated with this movement have survived, leaving the modern man with “a more dynamic understanding of his masculine identity and far more options in how he chooses to express it”. That’s right, we’re all Metrosexuals now.