One hot day in summer 2018, the internet erupted in fury. The cause? Not politics for once, but the cover of Forbes – the prestigious 100-year-old business magazine – featuring reality TV star Kylie Jenner, who had just been crowned ‘the youngest-ever self-made billionaire’.

Clad in a tailored suit, the owner of Kylie Cosmetics joined the likes of Sheryl Sandberg and Tory Burch on Forbes’ list of America’s richest self-made women, all thanks to sales of lip kits, glow powders and Millennial pink makeup palettes.

Of course, it was the ‘self-made’ label that rankled many, but this doesn’t negate Jenner’s extraordinary success in just three years. For comparison, Burch founded her fashion label over a decade prior to Kylie Cosmetics, and is worth $150 million less.

A more fitting descriptor for Jenner might be “selfie-made”, a term coined by journalist Natalie Robemed. A glib description, yes, but social media has been essential for establishing Jenner as a distinct personality, helping her connect with consumers closer to her own age – 22 – rather than the slightly older demographic following her sisters.

Jenner started documenting her life on social channels as far back as 2011, amassing 147 million followers on Instagram since among other online presences. Her chosen format, the selfie, lends itself particularly well to promoting cosmetics, and Jenner’s famous lips became a staple of many teenagers’ Instagram and Snapchat feeds.

Indeed, beauty fans are heavy users of selfie-rich platforms like these: 41% of women in the US & UK who count beauty as an interest are active on Instagram, 50 percentage points more than the female average. They’re also interacting with this content frequently, with the audience over-indexing for frequent Snapchat use by a huge 151 percentage points. That means consumers are taking note of what celebrities are putting on their faces.

Those specifically following celebrity beauty accounts on social media are also heavily influenced by content from these channels when it comes to purchase decisions. According to data from a sample of these account followers, 92% are influenced by social media when making purchases vs. 33% who primarily care about buying from prestige names.

Speaking in Business Insider, NPD Group Beauty Analyst Larissa Jensen observed that “having a large social media following equates to sales”. A large celebrity following like Jenner’s provides guaranteed customers for a product line, without the need for support from beauty giants with promotion and expensive advertising.

Creating a new brand from scratch means a celebrity founder can keep a larger slice of their profits. Kylie Jenner, for example, is said to own 100% of Kylie Cosmetics. In Jenner’s case, the production of her products is handled by SEED Beauty – one of several incubators working on celebrity brands – while Shopify deals with distribution, making Kylie Cosmetics a streamlined operation.

Celebrity business ventures, of course, are nothing new. But it does feel like every big star is joining the #hustle, having previously been content to license their name to a big conglomerate, as is the case with celebrity perfumes like JLo’s bestselling Glow (a collaboration with COTY).

Male celebrities have long invested in the alcohol market, resulting in recognisable brands such as Sean Combs’ Ciroc vodka – a popular drink among the hip-hop community. By contrast, fashion & beauty and increasingly, wellness (see Gwyneth Paltrow’s GOOP), are stronger areas of interest for their female counterparts.

These brands join the market at a time when there is a big appetite for independent beauty brands. In fact, US sales of ‘traditional’ makeup brands were down by 1% in 2016, compared with 43% growth across independent offerings such as Glossier and celebrity beauty. Fatigue with the hard-sell tactics employed by industry giants like L’Oréal are partly to blame for this, coupled by consumers’ desire for a more authentic retail experience facilitated by an individual they trust and admire. 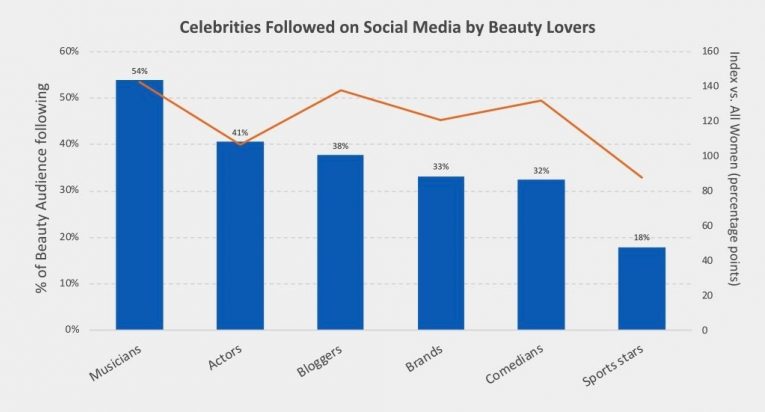 However, not all celebrities are equal when it comes to becoming a beauty entrepreneur. Considering the importance of social media to the sector – particularly its role in providing a ready customer base – US and UK-based beauty lovers are most likely to follow musicians on these platforms (54% do this), followed by actors (41%).

This bodes well for Lady Gaga’s nascent Haus Laboratories brand, which launched in the US last month. Starting out with six products, which retail from $16 – $49, the line can be purchased on Amazon as well as the brand website. This is a well-considered partnership: Amazon is a top site among beauty lovers, visited by almost two thirds during the past month.

Sports stars are not as lucky. Only 18% follow these personalities on social media, 13 percentage points below the average for women. This follows reports in 2018 that tennis superstar Serena Williams had trademarked the name ‘Aneres’ for use as a beauty company, though there’s been no news on this since.

If she goes ahead with the project, Williams will need to convince beauty consumers that an athlete has strong enough relevancy to the category.

Signs of a Downturn?

Yet there is evidence that the seeds of discontent have been planted, at least where some celebrity brands are concerned.

Kylie Cosmetics sales declined 14% this year, according to data from Rakuten Intelligence. Revenues were also down 62% from their 2016 peak by November 2018, with 60% of customers purchasing from the brand just once. Sales of her lip kits, the original product that made Jenner’s, but consumers have been less captivated by newer lines.

This summer saw reports that Coty is in talks to buy a 51% stake in the company, which if it comes to fruition could help Jenner tackle customer retention, thanks to Coty’s century of experience building brands. However, this begs the question: do celebrity brands work best when backed by beauty giants, after all?

LVMH and Fenty are an excellent case in point. In May, the French fashion & beauty conglomerate awarded Rihanna, Fenty’s founder, with her own fashion house to sit alongside iconic names like Christian Dior and Louis Vuitton. The deal was a landmark moment for celebrity brands, demonstrating that they can be credible alternatives to established players.

However, LVMH didn’t need much convincing: it followed two years of strong sales at Fenty Beauty – racking up $500 million during its first year of operation – which was launched in partnership with LVMH incubator Kendo. As a result, Rihanna has always had the backing of industry giants, ensuring her brand had the tools to succeed.

That’s not to detract from the enormous influence Rihanna has as a pop icon. Fenty Beauty’s key selling point is its embrace of inclusivity, catering to women not served by the limited shades provided by mainstream brands. As a popular black artist operating in a challenging industry, she is a credible face for this. As such, Fenty Beauty has greater brand purpose, arguably in contrast to a reality TV celebrity who has also admitted to receiving lip injections.

Will Lady Gaga’s Haus Laboratories be as successful? She certainly has the social following to support it. Let’s see if her Little Monsters bite.

Originally published on the EntSight blog.