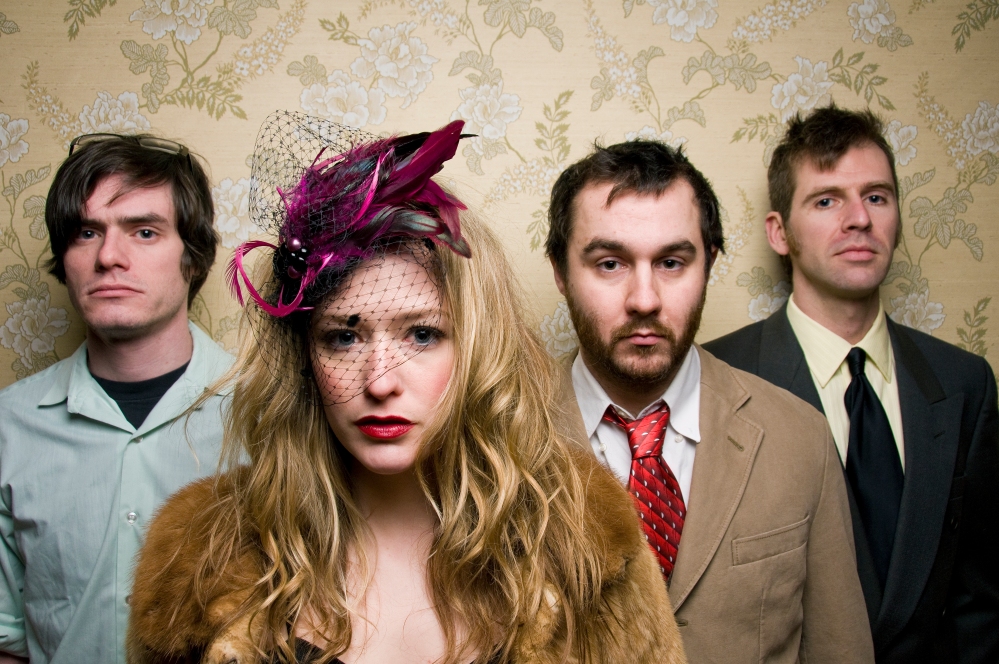 Rebekah Higgs talks about her split personality as frontwoman of Ruby Jean and the Thoughtful Bees.

Musicians love pretending to be other people and Rebekah Higgs is no exception. Rush hour traffic is still edging sluggishly up New Oxford Street, and in the sticky-floored Fly venue, Higgs is about to take the stage as Ruby Jean. In her native Canada, Higgs is known primarily for winsome tunes in the singer-songwriter vein, but tonight she has put down the acoustic guitar to become Ruby.

On a Monday night, however, this is proving difficult. Higgs and her band are kitted out in sparkly catsuits and skin-tight gold jeans: the audience, meanwhile, can’t quite shake off that post-work feeling. The band bashes out a set constructed from their debut, tonight including “Danse Danse Resolution”, a thumping electro number with a rock riff, and the sugary but moreish “Girls You Love”. It’s accomplished, if incongruous in a central London basement better known for indie bands, and Ruby Jean soon outgrows the small stage and sidles up to some surprised young men in the crowd.

Lyrically and thematically, there’s nothing complicated about these glittery misfits. But if performance is the object after all, Ruby Jean and the Thoughtful Bees could be one of Canada’s best exports since maple syrup: quirky electro-rockers with an ear for a beat and an eye for a nice jacket.

The band is a burgeoning side project for all involved, who count among their number Colin Crowell, drummer Nathan Doucet as well as “reformed band slut” Jason Vautour, previously of rockers Jon Epworth and The Improvements, on guitars.

Its early days yet for the band, who are planning their next record. Still, they’ve been up and down the UK already, showcasing their tunes at Brighton’s Great Escape Festival in 2009.  LF wonders when they’ll be back with some new material and whether Ruby Jean will have evolved into a more sedate young lady.

Who is Ruby Jean? What’s the story behind the band’s name?

The name is derived from my two grandmothers, one Ruby and one Jean. Ruby passed away just before we started the band.

How did you meet, and what made you decide to pursue a project away from your everyday music niches?

Colin and I had mutual friends; one day we started doing some recordings, experimenting with him breaking beats on the turntables and me singing and playing the MicroKorg. Those demos sounded kind of interesting to us, so we decided to pursue it more. After our first show, Jason and the sound guy, Sean [the band’s former drummer], were very into the music and wanted to know if they could join in on drums and guitar.

There are hints of trip-hop bands like Lamb in your music (e.g. in “Not About To”). What are your influences?

That song was on the original demos Colin and I did. I have to say I am really not influenced by trip-hop, but I did enjoy the Portishead albums. I’m in love with LCD Soundsystem, The Cure, Heart, and rehashing old 90’s bands. Somehow that makes sense to me. Typically I just get into an album and listen to it on repeat over and over again. It drives the guys mad. This week it’s Midlake, last week it was Violent Femmes.

How does it feel to be part of the burgeoning Canadian electro scene, along with bands like Crystal Castles? How long has this kind of music been popular in Canada?

We started this band for the local art school’s sweaty dances; we wanted to offer up a new dance scenario for the kids in Halifax who only had DJ’s and cover bands to go out to. It’s great to see more indie danceable bands popping up across Canada. This kind of music is attractive because there isn’t a drawn out initiation, you don’t have to be a music dictionary. It’s either you fucking want to dance to it or you don’t.

What do you think about your award for “Best Dressed band” [in The Coast’s annual Best of Music Readers’ Poll]? Do you think fashion is important to your stage persona?

I love that we have won “best dressed band” for the past two years. It started out with gold jackets and sequined dresses, and now [in] our stage show. I enjoy numerous costume changes from 80’s prom dresses to disco onesies while J-vo, our guitar player, dons hooded unitards or frankly just looks like an unleashed wild animal grazing the zebra patch.

Do you think being a female-fronted band gives you an advantage over other electro acts?

Nah, people want to be entertained. Maybe it is just more interesting that it is a girl starting a mosh pit, crowd surfing, and pouring beer on herself.  I can get away with kissing more people: both girls and boys don’t mind when I bend down to smooch them from the stage. There are just some things in life a girl can get away with easier I suppose.

Your solo music is pretty different to RJATTB’s stuff. You also appeared on the cover of a magazine recently under the heading, ‘Living a double life.’ Does it ever feel this way?

Absolutely, I have a split personality and these two outlets allow me to indulge in them. On one hand I’m this sweet sincere girl playing guitar, glockenspiel, keyboards, violin and looping my voice, then on the other hand I’m running around like a maniac on stage with gadgets, screaming in two microphones. Without both of them, I would not feel fulfilled.

You played the festival at Canadian Music Week last year. Was this the most high profile event you’ve participated in so far? As a relatively new band, how useful was it at getting your music heard by a wider, potentially international audience?

Canadian Music week was great, but I wouldn’t call it the highest profile event we’ve participated in. It was amazing because we got invited to go over to the U.K. and play some shows, and played in front of the Glastonbury booker and NME. But getting to play with talents we really respect and admire like Kid Koala and Thunderheist feels like a bigger deal to me.

What made you choose to cover a Paula Abdul song?

The VHS my neighbour had growing up of all the Paula Abdul videos. I’ve been hooked on that tune since I was 7.

Your myspace hinted that there’s new material in the works. Can we get any clues about what it might be like? Will it stay faithful to the sound of your debut?

I think the new material reflects how we are growing as a band and how performance has changed or progressed our sound. It’s all dancey and sexually charged. Some songs have more lyrics. I’m writing a lot.