Podcasts aren’t the first medium that comes to mind when promoting fashion brands. However, it might be one of the most underrated: podcasts are among the fastest growing forms of media, with over half of the US population – an estimated 144 million people – having listened to a podcast in 2019. Five years ago, this was less than a third.

But the appeal of podcasting doesn’t solely lie in the big numbers. Podcasts have an unrivalled ability to tap into an educated, affluent audience. According to GlobalWebIndex data, 46% of postgraduates and 41% of university graduates, have listened to a podcast in the past month, while close to half of consumers with incomes in the top 10% of households globally are fans.

This makes podcasts a particularly valuable medium for luxury brands, especially those looking to align themselves with different lifestyle segments. Chanel, Gucci and Hermes are just some of the big names in fashion taking note, either launching their own branded podcasts or advertising on other established shows.

A male-dominated medium with a growing female audience

Unlike the visual channels more frequently associated with fashion – like Instagram and Pinterest – men are the biggest podcast consumers. As of 2019, 42% of men regularly listen to podcasts vs. 37% of women. 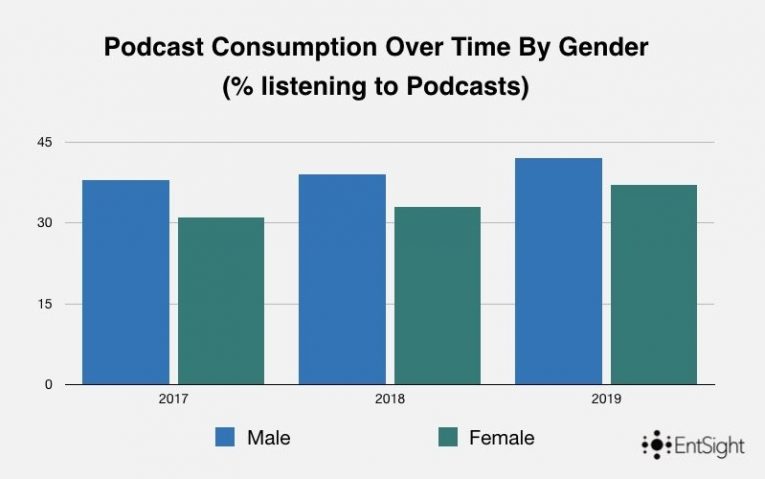 This is slowly changing: globally, women’s consumption of podcasts rose six percentage points between 2017 and 2019, but the trend is more pronounced on a regional level. In China, for example, where listenership now levels out at 56% of men and 55% of women, podcast consumption among women has increased by nine percentage points since 2017. Similarly, nearly half of Indian women listened to a podcast in the previous month, up from 40% two years ago.

So what does this mean for fashion? Right now, fashion isn’t at the top of the list when it comes to popular podcast genres. According to Nielsen data, music, TV & film, comedy and technology occupy the top spots among US households, all topics that tend to draw a larger male audience and reflect how podcasts are demographically tipped in favour of men.

However, as more women tune into the format, fashion brands have an opportunity to reach both genders and as a result, appeal to broader sections of their customer targets via a single medium. Coach is a good example of a brand doing this well: its ‘Dream It Real’ podcast – billed as “supporting the next generation and their dreams for the future” – features interviews with its male and female brand ambassadors, including Selena Gomez and Michael B. Jordan, on topics like inclusion, social media and authenticity.

While Coach’s nascent effort gathers steam, peaking at #12 on the US iTunes chart in April, other retailers haven’t been as lucky. ASOS’ ‘My Big Idea’ podcast, directed at a similar audience but around the theme of entrepreneurship, was scrapped in 2016 after just a year in production. This demonstrates the pitfalls of targeting too niche an audience, particularly by a brand that boasts such a broad customer base. Featuring individuals or topics that have only a tenuous link to the retailer – in ASOS’ case, female business owners – can also undermine the success of this content.

Gucci’s namesake podcast, which has been around for a little over a year, is an example of a podcast that avoids making this mistake, spotlighting creatives who are actively collaborating with the brand. Most recently, this has included soul singer Curtis Harding, a musician participating in its #GucciGig art & music initiative, and actress Hari Nef, one of the faces of the Gucci Bloom fragrance. 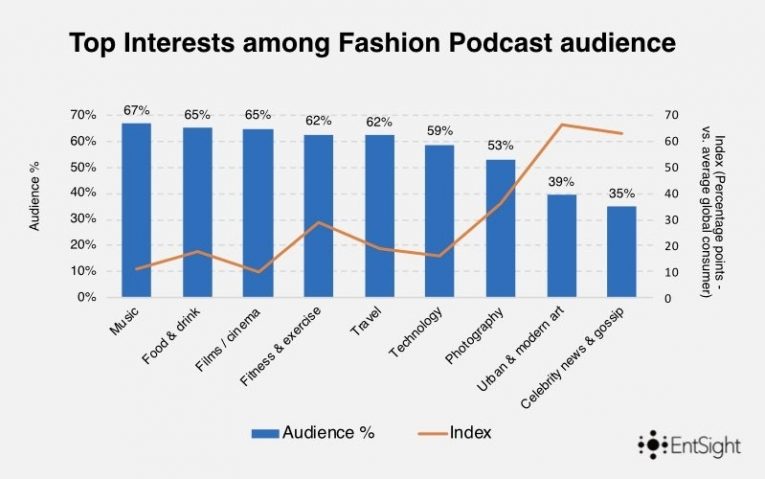 A key aspect of the Coach and Gucci podcasts is that they touch on a broad range of lifestyle and cultural topics, helping to maintain a broad appeal. This could also be a good strategy for attracting and promoting brand partnerships or sponsorships: according to research from Acast, podcast listeners in the US spend more on entertainment, travel and technology than the average consumer, so partners in these spaces would benefit from the airtime.

These are also popular interest areas among consumers who are highly engaged with fashion and regularly listen to podcasts. 62% counted travel among their top interests, while 59% enjoy technology. Music (67%) and film (65%) are also hugely popular, with personalities from these industries being some of the audience’s favourite people to follow on social media. Almost half follow actors on this channel, for example, making them a strong choice when identifying guests to appear on fashion podcast episodes.

There’s also growing interest in health and wellness topics, something that reflects bigger societal conversations right now – particularly among younger consumers. 62% of the audience engage with health & fitness, 29 percentage points more than the average consumer, and 65% take an interest in food & drink. This area is one the Coach podcast frequently addresses – for example, musical actor Ben Platt recently talked about the importance of authentic self-expression for good mental health.

At the other end of the market, Pretty Little Thing’s ‘Behind Closed Doors’ podcast mixes up discussion of these issues with celebrity gossip, a modern take on what former Vanity Fair editor Tina Brown described as ‘high-low’ content. In fact, the fashion podcast audience is 63 percentage points more likely than average to enjoy celebrity news and gossip, proving that listeners crave light-hearted fare too.

What about brands who don’t want to dilute their core message? Maison Martin Margiela and Hermès are two luxury brands whose podcasts rein their focus back to fashion and the workings of their businesses.

Hermès’ podcast ‘The Faubourg of Dreams’ – named for its original Paris store – takes listeners behind the scenes for an insight into the designers and artisans who create its products, all presented in snackable 10-15 minute episodes. Conversely, Maison Margiela puts its ‘In Memory of’ podcast in the hands of Creative Director John Galliano, who sporadically updates listeners on the making of the latest collection.

This approach has a more limited appeal, certainly when it comes to attracting new customers who have little interest in a brand’s backroom workings. However, efforts like Hermès’ do communicate the craftsmanship that goes into making their products, something that existing Hermès fans will appreciate.

The good news is experimenting with podcasting won’t break the bank. A Quartz piece from 2018 estimated the cost of producing an (entry level) podcast at just over $5,000 – a tough ask for amateurs, but very affordable for brands who would normally spend this promoting a single Facebook post. For those who don’t want to create further media properties, there’s always the option of advertising on a third-party podcast. Chanel, for example, has advertised on the New York Times’ ‘The Daily’ show, a current affairs podcast that attracts more than five million unique listeners each month.

Whichever format this takes, podcasting should be treated as an ingredient in the marketing mix that complements other activity, not as a standalone medium.